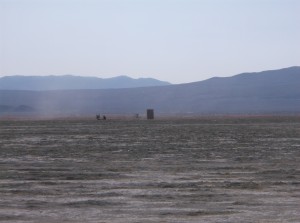 The cabinet was a slightly battered-looking piece of furniture, like you would find in a bedroom at a beach rental.  There were some drawers on the left, and two swinging doors, top and bottom.  The drawers were screwed shut.  The bottom door was secured with some heavy steel rings, locked with a bicycle lock, the kind that you dial in a combination of four letters and it releases. As I parked my bicycle and walked up to the cabinet, I could hear a woman’s voice from within, telling a story.  Here is what I heard, retold as best I can remember 6 weeks later…

I was on a journey, on the long road to Samarkand, when a dust storm arose.  As the storm worsened, I soon could no longer see the other travelers on the road.  Then, I could not see my companions, and eventually I could not see the road itself.  Soon I could not see my own hands, and then I could see nothing at all except the blowing dust.

I lay down, with my back to the storm, struggling to avoid breathing in the ever-present dust. Despite the simplicity and singularity of my purpose, the effort was exhausting, and after what seemed to be an eternity, I fell asleep.

When I awoke, the storm had broken.  I sat up, and could not see the road.  Nearby was a cabinet and an old man.

I spoke to the man and said, “Excuse me, I am lost, can you tell me where I am?”

The man looked puzzled and said simply, “You are here.”

Well, truer words have never been spoken, but hardly useful.  I began to suspect that the man was a bit simple.  “Yes,” I answered, “but where is ‘here’?”

“Here is where you are,” he answered.

I was now certain he was not fully sane.  I tried again: “I was on a journey, traveling to Samarkand, when a storm came up, and I no longer know where the road is.  Can you help me?”

The old man thought about this for a moment, and said, “If that is where you need to be, you are already there.  If you are not there already, then you do not need to go.”

I could see this was going nowhere.  Changing approach, I asked, “What is in the cabinet? Why is it here?”

“If you open it, the cabinet contains that which you seek,” he said.

When I walked up, the recorded story was already playing.  When it finished playing, I looked inside the upper, unlocked part of cabinet, and saw some plastic boxes with LEDs, and a set of speakers.  As I opened the door, the recording started playing again.   Wanting to hear the whole story from start to finish, I listened to it again.

I reflected upon this.  The story seemed to imply to me that there was more to the exhibit, but it was not obvious what it might be.   Many of the art exhibits at burning man have a “backstage area” where the electronics are hidden, and when I listened to the story the first time, I had assumed that was what was in the lower, locked compartment.   After I had opened the upper cabinet, I saw what seemed to be the mechanics.    So what was in the lower compartment?

I walked around the cabinet, inspecting the back, and sides.  There was nothing else of interest.  I fussed with the bike cable and saw it was quite secure, and the rings were securely attached to the cabinet.  If there was more, it was a mystery.

I walked back to where I had left my bicycle and was about to ride away, while I thought about  the story:

I went back to the cabinet, and examined the lock again.  I turned the dials to the letters D-U-S-T.  The lock opened.

Later, I saw that the couple had been watching me.  I went over to them.  The woman said, “We have been sitting watching people at the cabinet.  It is amazing how few people solve the puzzle, but the expression on the faces when they do is the most beautiful thing in the world.”    The man said, “This is my favorite piece of art here.  It has completely changed my experience.”

We talked for bit, and exchanged small gifts, as is the custom on the playa.    It also changed my experience, and was my favorite as well.

Much later, I took the time to read the descriptions of the art in the Burning Man book.  I discovered that it was one part of a five-part installation by Eric Dickson, called All These Gifts I Give To You.

I was a bit dismayed that there were four more related pieces that formed a larger narrative, that I did not experience.  That is the way of things, I suppose.  The world is full of amazing things that we will never know.  It is better to be happy with the things you have, than unhappy about the things you lack.